Charles Dickens was a man of many talents. We all know him for the stories he wrote, but perhaps what you didn’t know is that Dickens was also a gifted amateur magician. He experimented with various magic tricks and customs, the influences of which can be seen in his life and writings. On Tuesday, we were privaliged to have Magic Circle Comedy Award Winner, Ian Keable, take us on that journey in his show, “The Secret World of Charles Dickens” 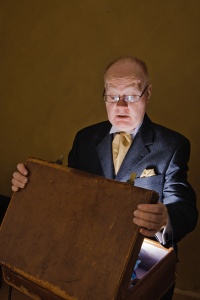 Decorated in Dickensian attire he showed us many of the tricks and illusions that dickens used to baffle others and that we’re used to baffle the man himself. Through research of Dickens’ books, articles and letters, Ian was able to create a show which mixed stories from Dickens’ life with tricks that still stun and bemuse modern audiences.

The show also delved into the world of spiritualism, a tradition that Dickens was actually quite skeptical about. We were taken on a tale of victorian mediums and the spirit world and even got to have a go at communicating with the spirits as well!

And remember, the show involves a great deal of audience participation – it’s not just a spectator sport! So be prepared to enter the magical world of Dickens yourself!

Error: Twitter did not respond. Please wait a few minutes and refresh this page.